History is full of Jewish inventors, some of whom are responsible for many of the most important inventions of our time.

Instead of going through the huge list of inventions in medicine, physics and more, we chose to cover some very interesting inventors and their invention stories – most of which you probably never heard about or didn’t know were Jewish!

Gil Weinberg was born in Jerusalem, Israel (1967), and studied piano since the age of 7. His teachers were very strict on theory, posture and hand positioning, taking some of the fun out of music playing for the young Gil.

When he wanted to start composing his own music, they objected, claiming he needed to first master the proper technique and the fundamentals before he could move on to creating.

Weinberg rebelled against this approach, and this path has largely led him to his current career in music and technology were he focuses on helping people create music without having the proper technique.

(ZOOZ means move in Hebrew) which allows you to play music by moving your mobile phone in different way. ZOOZBeat is a mobile musical studio, that’s very intuitive and allows non-musicians to start creating music, easily.

Gil Weinberg is also the inventor of two musical robots:

Haile is a robot drummer, who listens to what musicians are playing and plays along with them, and ‘Shimon’ is a robot who analyses what it hears and then improvises to the music.

Haile, a robotic percussionist, detects the rhythm, pitch and how loud a human musician is playing, and then mimic the same rhythm or improvises by multiplying the beat. It was co invented with Scott Driscoll.

See Haile the robot in action:

Shimon is an improvising robotic marimba player, has 8 arms and a bobbing head, and is capable of identifying the scale and rhythm of a piece of music and then to improvise based on those basics. He was also programmed to imitate the improvisation style of some famous jazz musicians.

See Shimon the robot in action:

Weinberg is a professor of music technology at Georgia Tech Center and has 7 patent applications to his name and 2 issued patents.

Jewish Inventors story #2:
Morris and Rose Michtom,
The inventors of the Teddy Bear

Rose and Morris Michtom, Jewish Russian immigrants to the US, are known for inventing the first ever Teddy Bear. Michtom arrived in NY in 1887 and lived in Brooklyn.

He was selling Candy and other small items by day in his shop, and at nights his wife Rose created stuffed animals which they then sold in their store.

In 1902, like many other Americans they were following closely the story of president Teddy Roosevelt and the bear.

Roosevelt was out on a 4 day bear hunt expedition, but wasn’t able to shoot any bears. To save his reputation in the eyes of the press, a fellow of his found and tied to a tree a small bear cub, so that Roosevelt could kill him.

So far, not a very nice children friendly story...

However, upon seeing the bear, Roosevelt refused to shoot him, claiming he only hunted prey that had a fair chance to defend itself.

The incident was reported in the press and a caricature was published showing Roosevelt turning his back from the tied up bear. The American nation was in an uproar, with everyone supporting the president and commenting on the his self-restraint and compassion. 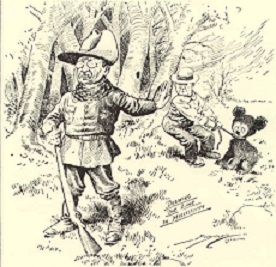 The Michtoms who were following the story together with the rest of the American nation, came up with the idea to create a stuffed bear toy, depicting the famous bear from Roosevelt’s story.

Rose Michtoms created the bear, and they displayed it in their shop the next day with a note saying simply: Teddy’s Bear. Before they knew it, the bear became a big success, with requests from customers to get one for themselves, flooding the store.

The two Jewish inventors, even sent the original bear toy to the white house, and asked if they would be allowed to keep using the name 'Teddy' to sell the bear, without, god forbid, insulting the president.

With the approval granted from the white house, they went on to create and sell many more bears, soon realising that there was more chance for profits in selling teddy bears, than in keeping up their shop.

The toy became so popular that Roosevelt and his party adopted it as a campaign symbol, and a teddy bear graced every public white house function before the election of 1904.

The Michtoms ended up setting up their own toy company, 'The Ideal Toy Company', which sold millions of teddies throughout the world.

They were never able to get a patent granted to their toy invention.

Their original Teddy bear, the one they have sent to the white house, is still displayed in the Smithsonian to this day.

Jewish Inventors stories #3: The inventor of the Flexible straw (flexistraw)

A great and relatively unknown Jewish inventors’ story is the story of Joseph Friedman, the inventor of the flexible straw.

Friedman (1900 – 1982), was a prolific inventor, whose life passion was to come up with new invention ideas.

He invented his first product, the pencil-light (a lighted pencil) at the age of 14, and in the years to come experimented with inventions in the fields of house products, sound and optics, writing solutions and engines improvements.

His most well-known invention, however, is that of the flexible straw, also known as flexistraw.

The invention came to be, by accident, like many inventions do.

He once observed his young daughter struggling to drink her milkshake through a straight straw, as it was too high for her.

He took the paper straight straw, and by inserting a screw into it and wrapping dental floss around the screw threads, he managed to create corrugations in the paper, shaped like the screw circumference.

Once he removed the screw, the paper straw could be bent conveniently over the edge of a glass, and allowed small children to drink more easily.

Friedman patented his invention, both in the US and abroad, calling it: ‘the drinking tube’. It was originally sold to hospitals, since it helped facilitate drinking for patients who were lying down in bed, unable to get up.

They could position the flexible straw in a way that allowed them to drink the contents of a glass, without spilling anything.

Friedman tried to sell his invention to several straw manufacturing companies, without success, and ended up setting up his own company.

‘The flexible straw corporation”, sold flexile straws until 1969 when it sold all its US and foreign patents and all other intellectual properties, to the Maryland cup corporation, which today still sells 500 million flexible straws, a year.

Know of other interesting Jewish inventors?

If you want to share the story a jewish inventor, whose name and story are not part of this page, please take a minute and submit a page:

Know of another Jewish inventor we should feature?

Do you have a great story about an interesting Jewish inventor? Share it!