The PrintBrush, arguably the most revolutionary printing invention in recent years, is the result of a new product idea developed by engineer Alex Breton, back in 2000.

It weighs about 8.8 ounces, has its own digital camera and the ability to connect to the internet and other devices via Wifi, Bluetooth or infrared.

Much like regular paint brushes are used on canvas, the PrintBrush prints out images as the user swipes it over almost any surface.

The current version can print photos and documents in B&W at a size of up to 4x6-inches at 600dpi while a new A4 version will be able to print full sized documents in full color. 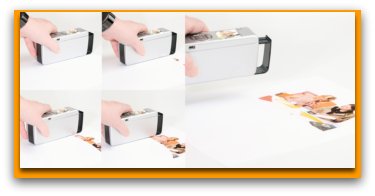 The PrintBrush – How It Works

Using laser optics to navigate the inkjets across the page, the Print Brush is able to maintain and track its print head position next to the surface, similar to the way a computer mouse works.

The technology reverses the traditional way by which printers work, sliding the paper is through the printer, in order to maintain the print head position while printing.

Laser sensors track the position of the printer next to the surface continually, as the user slides the device over the surface.

By measuring the structure of the reflected laser beams and the fluctuations in their power the device is able to match the location of the printer against the surface, with the image pixel map it is printing. Using sophisticated algorithms it can also predict which pixels to print next, maintaining a decent rhythm of printing a small image in less than 10 seconds.

Random movement printing technology is considered highly eco-friendly and if adopted globally is estimated to save tremendous amounts of raw materials currently used in traditional printers as well as produce savings in electricity.

The Print brush’s inventor is a Swedish engineer named Alex Breton. He was born in 1967, and is not new to the process of innovation. He has more than 20 patents registered to his name, and is known as a serial entrepreneur and a professional innovator.

In 2000, he first came up with the concept of the hand held brush, after a large European rubber stamps company approached him asking for ideas for new innovative products they could develop in the future. The process ignited Breton’s thinking process and led to the design of the new product concept.

The first prototype was constructed within less than two years, but it took almost another ten to have an actual product that can be used properly. The cost of the process? This is no home garage project, with a reported $10 million spent on the development process.

Alex Breton is also the founder and owner of Printdreams – the company which develops, manufactures and sells the Print brush.

Return from PrintBrush to Recent Inventions

Return from PrintBrush to Inventions Home